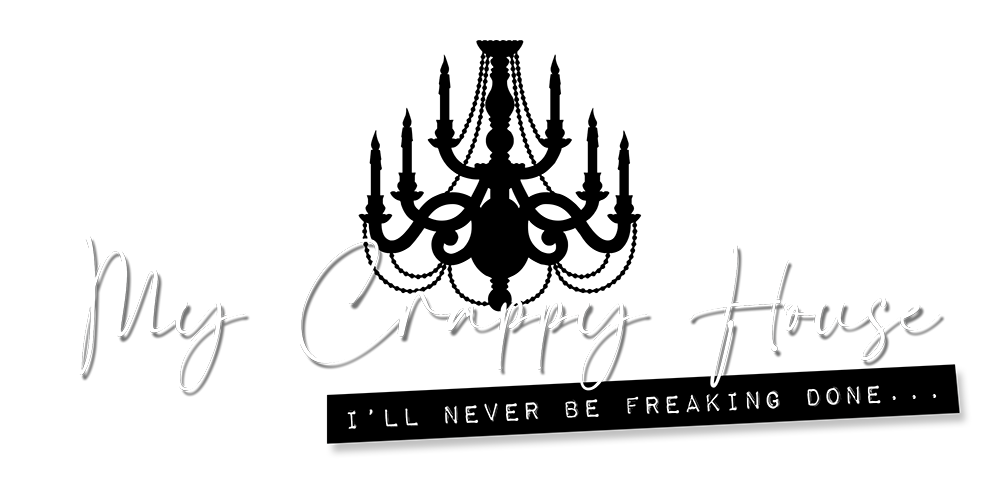 Let Someone Else DIY for a Change

This is my favorite kind of post. The kind where I get to tell you about a major improvement to My Crappy House that I didn’t have to do myself. Because who even DIYs a freaking driveway anyway? The answer is crazy people and pretentious show-offs. Admittedly, I do usually fall into the latter category (yeah, OK, the former too), and, you’re right, this is a DIY blog, but even I have my limits.

Besides, my steamroller was in the shop…

May the Driveway Rise Up to Meet You

A couple of months ago, on a chilly Sunday afternoon, a stranger knocked at my door. He told me my crappy driveway looked… well, crappy… and he could make me a new, awesome driveway for very little money with the leftover asphalt he had from the end of the paving season. He had no work truck (it was in the shop) and he had no business cards (forgot ’em), but he did have a lovely, lilting Irish brogue, so I was like… SURE!

(With an accent like that, he could’ve asked for my kidney and I’d’ve given it to him.)

Thanks for nothing, Santa.

Yes, I realize that picture is from 2012, but Google Earth doesn’t have any from 2011 when I moved in, and I didn’t take any myself.

I know. I really dropped the ball on that.

Ten freaking years is a long ass time to suffer the embarrassment (and the mailman’s judginess) at having such a crappy driveway, so when a complete stranger with a sexy Irish brogue offers you a ridiculously shady sounding deal, you don’t think about it. You just say yes.

(And be grateful he didn’t say kidney…)

The Best Driveway Type for a Busy Road

I live on a very busy road. The kind where the people behind you actually get mad and aggressively honk and rudely gesture at you for slowing down to turn into your own driveway.

Because, apparently, when you live on a busy road, you’re supposed to ignore the speed limit and drive wicked fast until you’re in front of your house, then engage the emergency brake whilst simultaneously cutting the wheel like you’re freaking Mad Max, thus abruptly exiting the (Fury) road without impacting your fellow motorists.

Now imagine trying to back out of your driveway onto this same road. There’s no maneuver for that. You think those jerks on the road are going to slow down to let you out? Fat chance. I need to be able to go from zero to sixty in 1.2 seconds to instantly blend in with traffic or risk certain potential death.

That’s why I have an “in and out” driveway. You know, like the drive thru at McDonald’s – in the entrance and out the exit. (Unlike McDonald’s, there’s no delicious food with zero nutritional value available at My Crappy House…)

(For purchase, I mean. Delicious food with zero nutritional value is pretty much all I have in my (formerly) crappy kitchen.)

My Crappy Driveway Before

So, while my driveway has always been crappy, it’s at least been functional. This is what I’ve had for the last ten years.

Here, I made you this drawing. You can pretend you’re a bird…

The lighter part where the cars are was a mixture of dirt, gravel, weeds, garbage, landscaping plastic and roofing shingles. (The last two items were presumably an attempt by the previous owners to deter the weeds. It did not work.)

The darker part in front of the garage was very old, very cracked asphalt that dipped down sharply to the left and ran along side the house all the way to the back yard. Why, you ask? That’s an excellent question. The answer is: I have no freaking idea.

The walkway was just plain dangerous. An undulating, broken, pain in the asphalt lawsuit waiting to happen. Thankfully, our delivery people are sure-footed because they’re here several times a day delivering our impulse Amazon purchases.

Incidentally, Schmoopy is the only one who’s ever fallen down on this walkway and it wasn’t in his best interests to sue me because we’re married now. Sucks for him!

(That he fell, not that he’s married to me. I’m a freaking catch.)

Poor Egor was not a fan of the crappy driveway removal process. It was so noisy! I found him hiding in the closet. My nervous boy…

Fortunately, the noise didn’t last long. They had most of the old driveway mess gone in a couple of hours leaving this new and improved mess, just bursting with awesome driveway potential.

We decided to leave the weird asphalt on the side of the house intact because it was in relatively decent shape, wasn’t bothering anyone, and was very low maintenance, as it never needed mowing. But during the demo, The Irishman called Schmoopy to suggest that it would be much smarter to include it in the job.

He said he could give us a good deal to pave that area and did his best to convince us that we would regret not doing it. Luckily, Schmoopy is not vulnerable to the sexy accent like I am, so he held firm. There was no need to spend more money on an area that wasn’t a problem for us.

That’s when we learned that an overzealous machine operator had already ripped that whole area out and Shady McPaver was trying to make money off of the error. If anything, he should have offered to repave it for free because it was their mistake, but we decided to let it go. It never made sense that it was paved in the first place so it wasn’t worth a fight.

We told McPaver that we basically wanted the same thing we had before, only pretty. To save you from scrolling (you’re welcome), here’s a reminder of what we had before…

There was plenty of room for our two cars to park side by side. We definitely wanted to still be able to do that, but we also didn’t want our whole front yard to look like a parking lot. I figured the layout would basically stay the same.

If you’re a regular reader, then you know I take an obnoxious amount of time to make decisions. I agonize over them because things that are undecided can’t be “wrong” yet. I don’t move forward with projects until I am one hundred percent SURE about what I want. And the more expensive something is, the more sure I need to be.

Would you believe the paving guys didn’t give me anything to decide on? They just went ahead and did their own design, like they had free reign. Like they were totally sure that I would love what they did without my input. Like they had absolutely zero instinct for self-preservation.

The Luck of the Irish

Bloody lucky Irish fools. In a shocking plot twist, I actually love how this turned out. I know, right? It’s a freaking miracle!

I mean, I could be upset that there really isn’t room for two cars to park comfortably side by side, but I really dig the asymmetric design and we did gain a nice area by the street to add a little bit of landscaping.

After some experimental parking choreography, we’ve settled on the arrangement you see above. Schmoopy is able to pass his truck by my car, then back in along the far left side. When we have company, I can back in next to Schmoo and let our guests fight over the remaining real estate. I bet we could get about eight cars uncomfortably parked if we need to.

I’ll shut up now so you can enjoy these pictures of our fancy new driveway.

And I’m back. Did you miss me?

Hey, remember this health hazard? Not only is this walkway pretty now, but they changed the direction to be straight towards the street.

I doubt McPaver has any inkling of the nightmare he avoided. (The nightmare that is me.) How amazing it is that I love a project that was totally out of my control. This never happens. Luck o’ the Irish, indeed!

Of course, I never have the money to pay anyone to do the work, so there’s that. And now that I’ve gone and spent everything we had on this driveway, I guess I’ll have to take back the wheel and drive the DIY bus myself again.

I’m both relieved and a little sad. Relieved to be in control again, sad that I can’t afford not to be.

My Crappy Driveway | Before & After

This picture isn’t quite as “before” as before gets, but it’s close. (A more beforer “before” is in this post.) Notice the severe lack of curb appeal. Not only with the driveway, but with the windows, trim and paint.

(Yes, the landscaping sucks too, but I haven’t fixed that yet so there’s nothing to link for you. Thanks for pointing it out though.)

Here’s what My Crappy House looks like now. Much more appealing from the curb, wouldn’t you say? And how about that front door color. Super cute, right? Click here to see how I did that. (Spoiler alert: I used paint.)

Guys, we have a freaking awesome driveway now! We took a gamble on a shady proposition from a complete and total stranger with a magically delicious voice and it paid off.

At least we hope so… I guess we’ll have to wait and see how the driveway holds up to know for sure. If you subscribe, I promise I’ll keep you updated.

Every time you share, an angel gets their wings. 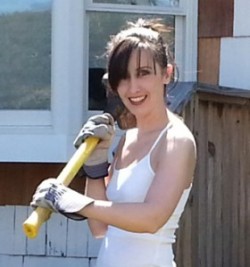 I've been waiting for you… (but not in a creepy way)

Anyway, what took you so long?

Welcome to My Crappy House! This sledge hammer is stupid heavy, but I make holding it look easy because I am deceptively strong. Click on my pic to find out more about me and My Crappy House.